Today is Anti-Slavery Day. We have shared a series of tweets on our Twitter page to raise awareness of Modern Slavery, how to spot it and how you can report concerns, as follows;

What is Modern Slavery? Modern slavery covers a range of abuse and exploitation, from women forced into prostitution, children and vulnerable adults being forced to deal drugs and people forced to work long hours, in poor conditions for little or no pay.

Myth – Modern Slavery is a thing of the past.

Truth – There are currently more people in slavery than at any point in history. The Global Slavery Index (2016) estimates that there are 45.8 million victims of Modern Slavery worldwide.

Myth – Only people from overseas are victims of Modern Slavery

Truth – Victims of Modern Slavery can be any nationality. The most commonly reported potential victims in the Thames Valley last year were UK nationals

Modern slavery could be happening in your community so it’s important you know the signs that could indicate someone is a victim of this crime.

Appearance – Do they look malnourished or have untreated injuries?

Behaviour – Are they acting anxious, unable to make eye contact or under the impression that they have a debt or ‘owe’ someone

Work – Are they working long hours for little or no pay with no days off? Are they wearing unsuitable clothing and do they lack the right equipment for the job?

Accommodation- Is where they are living overcrowded and poorly maintained?

Movements – Is their freedom of movement restricted? Are their ID documents controlled by someone else?

It is important to remember that there is no typical profile of a Modern Slavery victim, as anyone can be exploited.

Myth – Victims of slavery are always restrained with chains and handcuffs.

Truth– Victims of modern slavery aren’t always physically restrained. There are many other control measures that may keep an individual in that situation such as threats, violence and deception.

Communities have an important role to play in recognising abuse and if you suspect a person may be a victim of Modern Slavery, tell someone. To report a suspicion or seek advice you can contact the Modern Slavery Helpline confidentially on 08000 121 700. This is open 24 hours a day, 365 days a year and the helpline now also runs a reporting App.

You can also call Thames Valley Police on 101 at any time to report an incident. Always dial 999 if there is a crime in action or immediate threat to life.

There is support available for those who may have been exploited. The National Referral Mechanism is a government programme of support which includes access to safe accommodation, counselling and legal advice for victims. 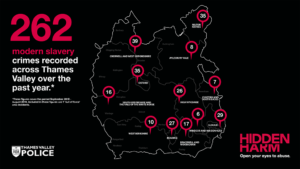